Junneth is one of the most enthusiastic 10th graders you’ll meet. She confidently said she’ll pass to Sierra Leone’s 11th grade, and she just did.

Junneth is also a 27 year-old mother of three. She’s back in school again in Rotifunk’s Bumpeh Academy with a scholarship and uniform after a five-year absence. 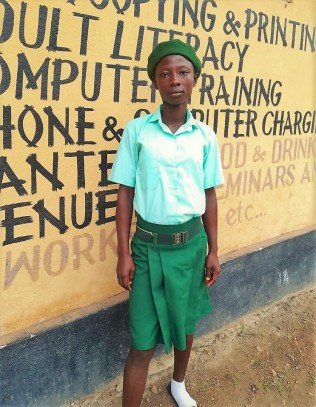 Junneth had passed the senior high entrance exam years ago, but her single mother just couldn’t afford her school fees, and she had to drop out. She doesn’t know her father. Along the way, Junneth married, bore four children, and lost one.

Sherbro Foundation’s Girls Scholarship program makes it a priority to keep young women like Junneth from dropping out of school. We offer scholarships to advance them to senior high and on to graduation. At $25, it’s an incredible bargain.

People tell me Junneth is one of the hardest working people they know. She gardens all around the house she lives in. Her landlady, above left, gave her a room rent-free because she works so hard to support herself and her children. 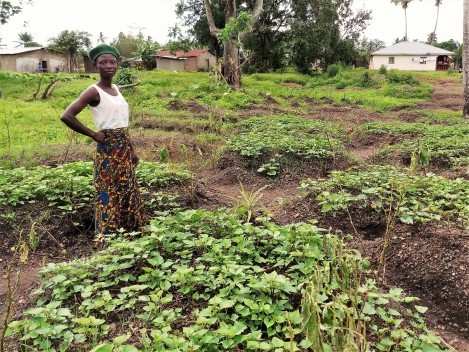 Junneth grows sweet potatoes, (left), corn, yams and eggplant to eat and to sell in the market for money to live on. You’ll see her in a nearby river after school catching fish to eat.

Her husband is an “unqualified” teacher in another town. He’s not credentialed to be paid by the government, so his income is meager. He has little to offer his family.

As time went on, Junneth became more and more motivated to return to school. “I don’t want to sit down and be a woman who be in the kitchen,” she told me. “If I don’t have education in my head, he [my husband] will leave me and go to another who has learned. So that give me the cause to return to school.”

She explained, an educated woman can work and improve the community. People respect her. Men respect her. When a woman can earn a living and help the family, it helps her marriage. She said, “If I learn, I also [will] have something. He will give; I will also give.” A two-career couple is needed in Sierra Leone to move away from subsistence farming to a more middle class life, just as much as it’s needed in the US.

It also frustrated Junneth to watch many of her friends who completed high school do well with paying jobs. “Some of my sisters go to college. Some of them are teachers. Some are nurses right now… When I see them, I feel offended. I say, why? Some of them, I beat them [on the past senior high entrance exam].”

Junneth also knew that her children would fare better with an educated mother’s help. “When I learn, my children also learn.”

Last September, Junneth went to Rosaline Kaimbay, managing director of the Center for Community Empowerment and Transformation, which administers Sherbro Foundation’s Girls’ Scholarship program. “I cry to her, please help me. And she did. I really appreciate it.” 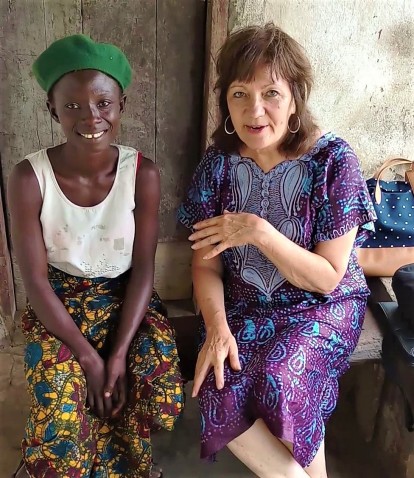 Mrs. Kaimbay arranged a scholarship, asked Bumpeh Academy to enroll Junneth in school and gave her a uniform. She became a proud 10th grade student, in her first year of senior high, picking up where she left off years before.

Her principal just confirmed that Junneth passed her first year despite her long absence, and is moving on to 11th grade. She’s become a role model for other girls in school – and for her children.

“I want to do nursing. That is my plan.”

My grandmother was a nurse and taught me many things. She called me, even during the night, when delivering a baby. I want to be higher than [my companions who are nurses] if I put my focus there.”  With a small hospital in Rotifunk and government health centers in villages around the area, there should be a job for Junneth when she’s ready.

Junneth’s story of determination to get an education despite the odds and life’s cruel detours is not unique. Many Sierra Leone senior high “girls” are really young women, 21 and 22 years of age or more by the time they graduate. Their educations were interrupted – maybe more than once – because their families couldn’t continue to pay. Often one or both parents died, became ill, left the home, or aged and stopped working.

Early marriage and children are the fate of too many young women forced to drop out like Junneth. Sherbro Foundation’s goal is to keep them in school, learning and preparing for careers where they can support their families and help develop their communities.

I’d say that’s a tremendous investment from a $25 scholarship. Paramount Chief Charles Caulker sends his thanks for everyone’s support in sending Bumpeh Chiefdom girls to school. Parents, he says, are taking advantage of the opportunity the Scholarship Program offers to educate their children.

“More girls here are learning and at a higher level than ever before.”

You can return Junneth to school in September and young women like her. Please help here: I’ll send a young woman to school.

We’ll double your impact. Our matching funds are being claimed. But the Sherbro Foundation Board will match the next $4000 donated.

One thought on “Never Too Late to Return to School”