Every girl in Sherbro Foundation’s Girls’ Scholarship Program — now more than 600 — has a story to tell. But even in this program for the neediest, Fatmata’s story is heart-wrenching.

We’re kicking off the 2018-19 Girls Scholarship drive, our sixth, with the story of one our first scholarship recipients and how $25 scholarships have changed her life.

Fatmata has received SFSL scholarships for four years, allowing her to finish the 9th grade at Bumpeh Academy. Soft spoken, Fatmata (white headscarf below) enthusiastically attends our partner CCET’s after-school tutoring program, prepping 9th graders for their national junior high completion exams. She breaks into smiles as she joins her classmates, all eager to prepare for senior high. Advancing girls to senior high is one our main objectives. 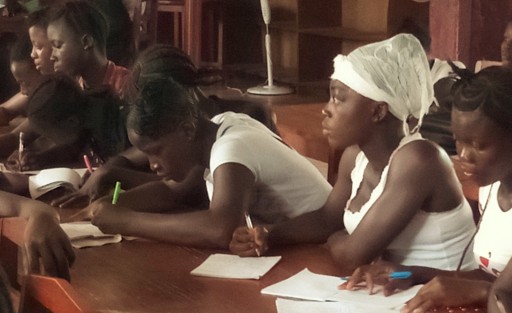 Sherbro Foundation’s scholarship program gives priority to girls who are orphans or with single parents and from low-income families, even by local standards. Many from villages must leave their families to board in town to attend secondary school — another costly expense. Too many drop out after junior high without funds to continue.

Fatmata’s not sure how old she is. We estimate she’s 17. Her family was typical of many in Bumpeh Chiefdom. Her mother was the first of her father’s three wives. As the senior wife, she took the youngest wife’s child to raise with her own, a tradition. The child went missing and was found dead with no explanation.

Fatmata’s mother was held responsible and put in prison. Pregnant at the time, she delivered in prison and was released when the baby was a year-and-a-half. Fatmata had completed primary school, but her angry father gave no support for her mother or her children. Fatmata couldn’t start secondary school.

The Ebola epidemic hit when her father was home in adjoining Ribbi chiefdom. He was quarantined in a village with the virus, contracted Ebola and died. Fatmata’s mother now widowed with five children became involved with another man. While pregnant again, she had an uncontrolled infection. She and the baby died.

Fatmata’s father’s family wanted her to live with them in Ribbi Chiefdom. She resisted, “I was afraid in Ribbi I wouldn’t be able to go to school.” Another stepmother had enrolled her in junior high in Rotifunk where she received a SFSL scholarship and a uniform. Ribbi has no scholarship program. 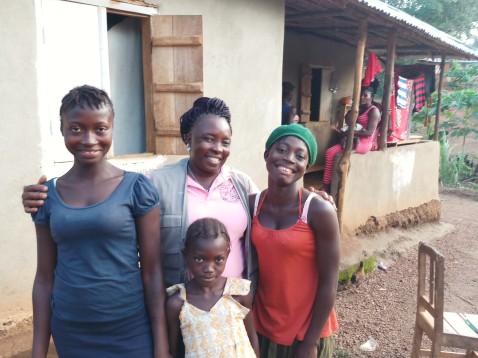 “She made a good choice to stay here,” said our local partner CCET’s Managing Director Rosaline Kaimbay. “She’s determined to learn. We need to motivate her. I love the girl. So bold. I will follow her progress.”

Fatmata (green beret, left with Mrs. Kaimbay) and her two younger sisters (also left) live with their maternal uncle and grandmother in Rotifunk. I counted at least ten in their small house. Her uncle is very supportive of his three nieces. I never met her hard-working grandmother, always out in her small peanut farm.

During that tumultuous time, Fatmata had to repeat her first year of junior high. She’s continued to advance to the 9th grade with four SFSL scholarships.

Fatmata, left, at her home’s outdoor kitchen where they cook on a wood fire sheltered from sun and rain.

In two weeks, she’ll take her national 9th grade exams and has a very good chance of moving on to senior high. She’ll be part of a small elite group of rural girls working for high school diplomas.

Fatmata is the kind of success story we work hard to support with our scholarship program. 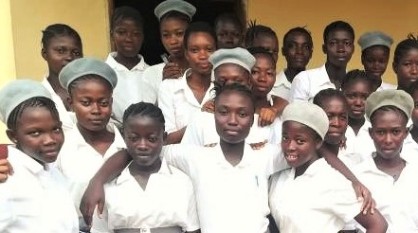 Many other bright girls are eager to keep learning, often after interruptions in their educations.

Girls like Fatmata are the future of the country. A number of men and women alike have told me they support girls going to school: “When you educate a girl, you educate the country.  A boy just looks after himself.”

After telling me her story, Fatmata asked, “After school, who will take care of me?” We’ve helped her this far, but then what? She has no role models to follow.

I paused for a moment, and then told her, “You’ll finish school, go to college and get a good job. You’ll be able to take care of yourself and help your family, just as Mrs. Kaimbay and I have done ourselves.”

Your $25 scholarship will keep Fatmata and girls like her in school and out of early marriage and teenage pregnancy. It will give them the chance to gain independence after graduating by getting a wage-paying job or entering vocational school or college. Teaching, nursing and the police force are traditional jobs. But we want to encourage girls to go into growing fields with jobs like accountants, IT support, lab technicians, floor tilers and electricians.

In just five years, you’ve made the Girls’ Scholarship Program a great success with over 600 girls getting the help they need to attend secondary school — and keep advancing. What’s happened to last year’s cover story girls?

Isatu, an orphan in senior high, just completed 12th grade. She’s awaiting the next national senior high completion exam. She could be a candidate for our new college scholarship program.

Alima, (2nd from left) a motherless girl, walked five miles each way to school from her aunt’s house. Now in the 9th grade and living with a Rotifunk relative, she gets CCET tutoring for her junior high completion exam and is in the computer training class, too. One of her school’s brightest, she was one of two students to represent the school in a local interschool quiz competition.

Our goal for this year is to at least match last year’s results and again award 460 scholarships to deserving girls. We continue to emphasize advancement into senior high. Your support has doubled the number of girls in senior high over the last four years!

We have great news from the newly elected Sierra Leone government. They will be paying school fees for all secondary students as part of their program to improve education.

Sherbro Foundation’s $25 scholarship award this year will consist of a uniform and notebooks for each awardee. These supplies actually cost more than school fees and are a formidable barrier for most Bumpeh Chiefdom students. Uniforms hand sewn by local Rotifunk tailors help keep costs down.

We hope you’ll help send Sierra Leone girls back to school in September. Yes, $25 can be life changing for so many girls like Fatmata.  Please donate here: I’ll send a girl to school.

We’ll double your impact. The first $5000 in gifts will be matched!