School is slated to reopen in April across Sierra Leone. It won’t come any too soon for both teachers and students weary of the seven month limbo they’ve been in since the Ebola crisis closed schools last September.

Zainab is one of the girls I’ll be watching for. She’s gone to one of Rotifunk’s secondary schools with scholarships from Sherbro Foundation.

Last year, I talked with Zainab and found she has a big dream.  It’s a dream we want to help her achieve.

Zainab has had a difficult time completing secondary school.  I worried she might be one of those not returning.  At 19, she’s a young woman, and it’s hard to find the means to stay in school. The longer teenagers stay out of school in Sierra Leone the less likely they are to return, especially the girls.  Ebola has only made that worse.

Zainab comes from a small village like this one on the road leading to Freetown.

Zainab comes from a small village about seven miles outside Rotifunk.  It’s ten mud houses, she told me, with an emphasis on “mud” houses. Her mother is a very poor farmer and old. When she told me her mother’s age, I laughed and said, “Well, that makes me old, too.”  “But you are strong,” was her reply.  Strong in Sierra Leone means healthy.  It also means I’m privileged to have the means to be this strong at my age.

Zainab attended junior high in a nearby town.  Four years ago when she was ready for senior high, her aging mother could no longer afford $30 to send her to school.  So, she sat home for a year.

An older man then persuaded her mother to let Zainab move in with him in Rotifunk.  He promised to help her finish school and then marry her. Zainab’s mother thought this was the only way to ensure her future. But he didn’t pay her school fees and didn’t marry her.  He was already married. He forced her to work for him by selling goods in the market. I’ll let you fill in the rest.

Principal Rosaline Kaimbay seeks out village girls like Zainab and encourages their parents or guardians to send the girls to high school.  Zainab started senior high with Sherbro Foundation scholarships two years ago. A teacher heard of her living situation and convinced her to leave the man and move to a friend’s home.

Zainab has now completed 10th and 11th grades, a real accomplishment.  Only one in six Sierra Leone girls is able to complete high school.  Zainab’s school will be starting its first twelve grade class this year. Zainab should be one of the first seniors in that class. 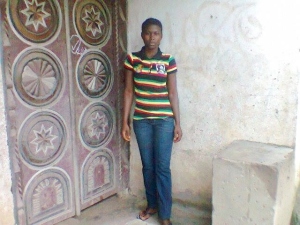 I want to become a doctor.

I spoke with Zainab last July before Ebola suspended  school.  Principal Kaimbay had told me she’s interested in studying science. When I asked Zainab why she likes science, she said with no hesitation, “I want to go to college and become a doctor.”

Not a nurse or a teacher, the usual responses. But a doctor. When I asked why, she immediately replied, “I want to save lives.”  She’s no doubt seen lives lost in her short life because there’s so little health care available.

With school now reopening, my thoughts returned to Zainab. I asked Principal Kaimbay if she’s been in contact with her, and will she be returning to school. Zainab has been living with her mother now. Mrs. Kaimbay regularly stopped by to see them since their village was near one of the Ebola check points on the way to Freetown. They’ve been scraping by, growing a few vegetables to sell. 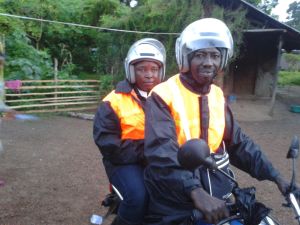 Mrs. Kaimbay is more than a dynamic principal and a gifted teacher. She’s an advocate for girls like Zainab, and a champion for girls and women everywhere in Bumpeh Chiefdom. During this long Ebola crisis, she’s made a point to connect with girls and their families whenever she could. She resorted to the back of a motorcycle to monitor and support the chiefdom Ebola control program — and visit village girls. She encourages and motivates the girls to stay focused on their education. School will reopen; we want you to come back. We’ll help you wherever we can.

Now she told me, yes, Zainab is ready to return to school.

Last July, I asked Zainab if she had any questions for me. She immediately asked: will I be helping with university scholarships? With girls like Zainab finishing high school in Rotifunk and determined to go to college, that’s something to be planning for.

God knows Sierra Leone needs more doctors and nurses. Now, they need to replace those who sacrificed their lives in the Ebola crisis caring for others.

Zainab gave me a message last July to bring back here:

“Thank you for helping us. We come from poor homes, but we are ready to learn. Without scholarships, we should drop out.”

Girls like Zainab are the reason I started the girls scholarship program. I think how many other bright, determined girls like Zainab won’t achieve their dreams without getting through that first formidable hurdle in their lives — secondary school. And the hurdle amounts to just $30 a year.

Zainab is the reason Sherbro Foundation does what we do.

You can help Zainab and other girls come back to school now.   http://www.sherbrofoundation.org/donate