People now ask me if the Ebola crisis is over. It’s certainly dropped out of the media here in the US.

But the answer is, no. The outbreak stubbornly hangs on in Freetown and three northern districts.  Getting to zero is proving to be more difficult than imagined. This is about changing human behavior on deeply seated traditions like burial practices.  Consistent behavior change across the country remains an elusive goal.

Today, March 18, the daily new Ebola case report had only one new case. That’s the lowest ever since the epidemic began. But yesterday was 14 new cases, and the last seven day total is 50. Ebola is not gone.

But much of the country is hanging on to their zeros. Bumpeh Chiefdom has now gone nearly 90 days without a new Ebola case. Their district, Moyamba District, is now 22 days Ebola free. 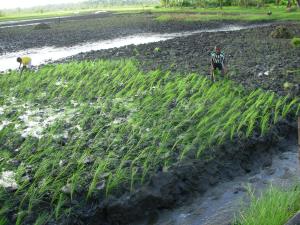 Today, however, everyone in Sierra Leone should be considered an Ebola victim.

The tragedy won’t end with eliminating the infectious outbreak. The economic and social impact on the country has been nothing less than disastrous. The majority of families’ livelihood is subsistence agriculture, and they are devastated. They depend on today’s market sale for tomorrow’s food.

The entire country’s economic growth has fallen by two-thirds. Mining and tourism are the two largest industries that brought foreign investment and cash into the country. Tourism is of course at a standstill. Little mining goes on.

For Bumpeh Chiefdom, incomes of farmers and small traders were cut in half when they couldn’t get crops to city markets. The three month chiefdom isolation order caused some people to just abandon farms and businesses. Others lost some of their harvest when seasonal laborers fled the chiefdom.

Prices for food, fuel and staples at the same time increased 30%. Feeding their families is now the priority. Things like sending kids to school is a luxury for many.

Bumpeh chiefdom has enough food to avoid starvation.  But the poorest families rely on cheap starchy foods like rice and yams. Not a balanced diet. This can cause developmental problems over time in small children like stunting.

Sierra Leone had the highest maternity and under-five mortality rates in the world even before Ebola hit.  In 2012, free health care for pregnant and nursing mothers and children under five started to change this. But with health care overwhelmed by Ebola, families avoided clinics and hospitals.

Many more people have likely become ill or died of common untreated illnesses like malaria, dysentery and typhoid than from Ebola, especially small children. Women and babies died because pregnant women did not seek health care, or they were turned away by health care workers fearful of the Ebola risk. The UN Population Fund estimated the Ebola epidemic may have caused 120,000 maternal deaths in the 3 countries affected by Ebola by late October – when Ebola had not yet peaked. Children are not being vaccinated against dangerous diseases like small pox. HIV goes undiagnosed or untreated.

Schools have been closed for seven months and more than 60% of the population is school age children. Keeping kids out of school will have a long term effect on the country’s development.  The longer teenagers stay out of school, the less likely they will return.

Teenaged girls are especially affected. Pregnancy rates climbed during the Ebola crisis with over 30% of schoolgirls estimated pregnant nationwide. Sierra Leone President Koroma is calling for pregnant girls and new mothers to come back to school and complete their education.

So is all lost in Sierra Leone? No! The people are resilient. The world development community learned hard lessons from Ebola on the importance of targeting local solutions and local leadership.  And Sierra Leone mobilized thousands of young people eager to help their country who stay connected with social media. 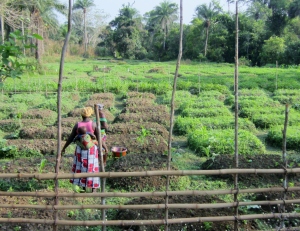 Sherbro Foundation goes back to our mission of supporting practical grassroots projects that quickly benefit the poorest people. Bumpeh Chiefdom’s Paramount Chief Caulker said his top two priorities now  are restoring income for hungry people and sending girls back to school. So we are helping them with two urgent programs for these.

The first is a vegetable growing program, so farmers can raise fast growing cash crops like peppers and quickly earn income again.

Our second urgent program is helping girls get back in secondary school.  School is slated to reopen April 14. The Sierra Leone government has a grant that will cover school fees this year for all secondary school children. But the $30 school uniform and school supplies will still be barriers for most poor families.

Sherbro Foundation’s goal this year is to buy school uniforms for 300 girls.

More on both these programs in future posts.

You don’t have to wait to help Bumpeh Chiefdom. You can donate now at www.sherbrofoundation.org/donate. Your money helps restore livelihoods and build self sufficiency.