This month we had American Independence Day when we (should) reflect on our country’s many freedoms and gifts, including the right to the “pursuit of happiness.” After spending time in Sierra Leone of late, I’ve thought more about what constitutes happiness.  Sierra Leoneans are known for being warm people and smiling – a lot.  But are they happy?

Westerners seem fixated on pursuing their own personal happiness.  Books abound on how to find happiness.  We have the Happiness Project, Authentic Happiness, even the Dalai Lama’s The Art of Happiness. Time Magazine’s cover story on this cleared up one thing.  Our Founding Fathers weren’t referring to each individual’s pursuit of happiness when they signed the Declaration of Independence.  Rather, they meant a government should be charged with providing an environment that fosters the happiness of its citizens; that gives you the opportunity to freely embark on your own pursuit.  The rest is up to you.

The country of Bhutan has gone a step farther with defining the “Gross National Happiness Index”, and how they as a government will measure the wellbeing of their citizens. They feel governments should be accountable not only for economic prosperity (GDP), but also for the general welfare and happiness of their citizens (GNH Index).  ie., why have economic prosperity unless the average citizen is better off.  http://www.grossnationalhappiness.com/articles/

Sounds good to me.  It’s an especially good message for developing countries to not get stuck on the treadmill of ever increasing GDP to the exclusion of their citizen’s welfare, and, well, happiness.

On any country index of wellbeing and happiness measures, Sierra Leone ranks near the bottom.  At least as measured by macro-measures like per capita income, child mortality rate, etc. Extreme poverty is not a happy place to be.

But what about individuals – real people.  These are some of the sunniest people I’ve met anywhere.  Sierra Leone has been called the Land of Smiles. As Westerners coming from the land of grumps, where people feel they never have enough, you are literally basking in the sunshine of the smiles of Sierra Leoneans.  Their singing and dancing.  Their strong sense of community and family.  But I’ve been wondering, with all the hardship in their lives, are they happy?  So, I decided to ask.

On my last trip, I went with the Paramount Chief and his family to spend two weeks in their ancestral village while they started preparing the rice swamps for next season’s planting.  This is a remote village of about 200 people and 25 houses.  I came with no organized group as a buffer or filter – no church mission, no NGO, no visiting ministry delegation.  Just them and me.  As guest of the chief, I was legitimized.  I was seen as OK to talk to.  In a village like this, there’s plenty of time to relax and talk. 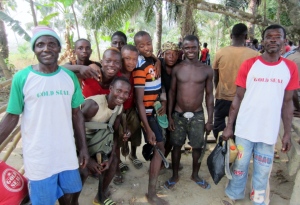 They just came back from working 6 hours in the rice swamp in the hot sun & can still smile.

So I asked people in a poor village, in one of the lowest income districts of one of the poorest countries in the world – what makes you happy.  I thought I better first get clear on a working definition of happiness here. This usually led to discussion of whether they had enough of what would make them happy, or, on the other hand, what they dislike or fear (unhappiness). Here’s some of the people I met.

Hawa, age 35, was born here.  She, her mother, and previously, her grandmother have been small traders, selling farm goods in bigger towns and markets.  She wants her daughter to get an education and be a nurse.  She would be happy when she has money to build a better house.  She also likes to be a business partner with her husband growing rice and making palm oil to sell in the city.  She’s proud when she gets what she needs, like repairing her house in the rainy season to not leak, and sending her daughter to school. She fears being poor. If you’re sick, you can’t go to the hospital without money. 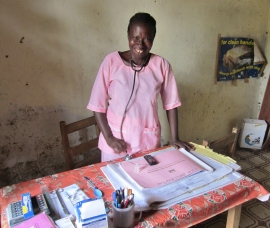 Nurse Adama is happy she safely delivered another baby at the local health clinic.

Mary, age 30, was born here and is married to a farmer. She makes banga (smoked fish) and palm oil.  It’s hard for her because she doesn’t have money for public transportation to take her things to market where she can earn more. Her family had to flee during the war and live for a year in the bush, collecting wild yams, bananas and fish, and slept on the ground.  People got some money after the war to come back and rebuild, but not enough for a zinc roof.  She has five children, aged 5 to 15, and feels good when she can educate them.  Then they can take care of her in her old age. She hates poverty, sickness like malaria and elephantiasis, and thieves. 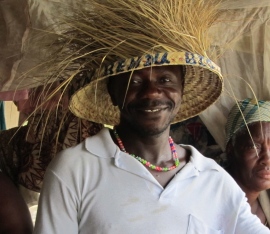 Sembu is a 45 year old man and captain of the paramount chief’s boat that operates like a weekly bus on the river to take people to the big Saturday market in Rotifunk.  He was born here, and has a wife and child in Freetown.  He is happy that he could return here after the war with a paid job, and one that he enjoys.  He’s also happy that he’s healthy.  He needs a zinc roof, a better health clinic and new outboard motor.

Abdul is 36 and came from another village to work for the paramount chief.  He lost his parents during the war and never went to school.  He likes hard work and enjoys planting rice.  He does whatever is needed on the farm, like climbing palm trees for coconuts and tapping palm wine.  He has three children, including an 18 year old boy who helps on the farm.  He’s happy when he has money for a good house, food and can pay school fees for his kids. He’s proud when the chief trains him to do work on the farm or sends him on errands.  He likes good clothes. He fears sickness and when married women flirt with him.  (Adultery is punishable with a stiff fine in this chiefdom.) 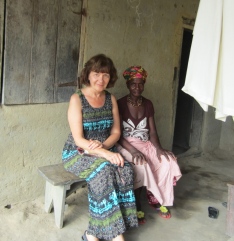 Masiry, oldest woman in the village on her front porch with Arlene.

Masiry is 70 and the oldest woman in the village.  She came with her husband over forty years ago to farm for the chief’s father.  She has three sons and two daughters, most of who are in Freetown.  She wants her children to be teachers, lawyers and even president.  One daughter finished high school and runs a small business in Liberia.  Most women voted in the last election and she was happy there was no violence. She will be happy if this president does well for his country.  She enjoys when she can do business, buying rice and palm oil here to sell in Freetown where she can double the price.  She’s proud to have a farm and be able to work it.  With more money, she would pay for her children to get more education.  Then they can take care of her when she’s old.  (Or older!) 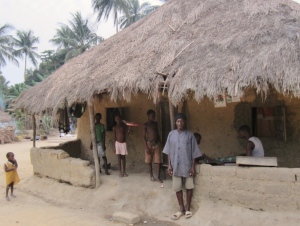 Town Chief Ali Kamara in front of his house.

Chief Ali, at 70 is the oldest man in the neighboring village a half mile away and the town chief.  He was born there, as were his father and grandfather.  He has fond memories of village life as a child, when he and his friends fished and sang and “behaved like devils.”  He had at least 15 girlfriends as a young man. When asked what’s difficult about now being town chief, he said collecting taxes and settling woman palaver cases. When husbands have girlfriends it’s the worst.  He laughed, saying he used to do the things he now has to give fines for (as adultery).  He’s happy he has good health and is strong  enough to still be a rice farmer with his children.  He has fifteen children, the oldest 48 years old and eight that are still in school.  When asked if the things that make you happy change over time, he said he’s only happy with a good house with a zinc roof that doesn’t leak in the rain, and when his children come to see him.

I don’t find people to be all that different in other cultures and countries.  Most people are looking for the chance for a decent job that pays enough for housing and daily needs, to educate their children, have good health and access to health care when they don’t.  And a peaceful town where they can live free of crime.

With the economic downturn and natural disasters of recent years, maybe the developed and under-developed countries have come closer together in what makes them happy.  They want the basics to live comfortably and have their family and friends around them.

Most people I know who go to Sierra Leone, one of the poorest countries in the world, feel uplifted after their visit. It isn’t so much because while there they feel they “did good” (altho hopefully they did that). It’s because they have taken in all the smiles, warmth, feeling of community, and celebrations of Sierra Leone.  When the music starts, the dancing begins. 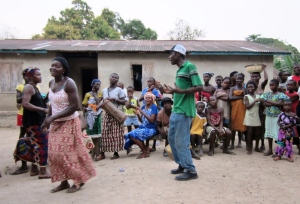 Singing & dancing in the village on one of our first nights there.

Are Sierra Leoneans happier than Americans? Or are they sadder? Who really knows.  I do think Sierra Leoneans have a more realistic understanding that unhappiness will visit them.  It’s not if, but when. That’s reality for them.  But, in the meantime, they smile.  They don’t act as if they’re entitled to be happy and behave like victims when unhappiness does come their way as many Americans do; the way many Westerners lament, why me? Or dwell on some unhappy event long after it’s past.

So, when you’re not being visited by unhappiness this day or week or year – why not be happy? Why not smile like a Sierra Leonean?  Smile, and maybe you, too, will feel happy.