Sierra Leone had its first confirmed Covid-19 case on March 31.

With falling virus dominoes encircling the world, it was only a matter of time. Sierra Leone was one of the last countries the virus invaded.

Sierra Leone’s government used its hard-won experience with the deadly Ebola virus to quickly react. But its directives are very difficult to apply in rural areas and no help has been forthcoming to Bumpeh Chiefdom. Once again, the Chiefdom is on its own.

We’re proud to report that Bumpeh is the first, and perhaps the only, chiefdom to implement a rural Covid-19 control program, led by Paramount Chief Charles Caulker. And Sherbro Foundation is proud to support it, with a $6,000 grant sent in March.

We know Covid-19 is a stealth virus and hard to control. But Bumpeh Chiefdom has a head start, learning from its Ebola ordeal. Covid-19 starts as a traveler’s disease, first carried in by air travelers from infected countries. Sierra Leone has only limited flights and directly quarantined all arriving air passengers in Freetown throughout March; starting in February, for passengers originating in China.

First cases The first confirmed Covid-19 case was a traveler who briefly went to France and returned to Sierra Leone. At the end of his 14-day quarantine period, he started feeling Covid symptoms and tested positive.

By April 16, Sierra Leone had 15 confirmed Covid-19 cases. Seven of the first ten cases were quarantined air travelers. Two more cases appear to have been in quarantine after coming through Guinea’s land border. Border countries Guinea and Liberia have growing number of cases, especially Guinea. This is the biggest risk with Sierra Leone now closed to commercial air travel.

Community spread My own first few weeks of Covid-19 experience in Ohio were flooded with Ebola flashbacks. Now, watching Sierra Leone felt like a disaster movie unfolding where I know the plot. Ebola was first carried across an isolated land border with Guinea. As sick people sought treatment, health care workers were infected. 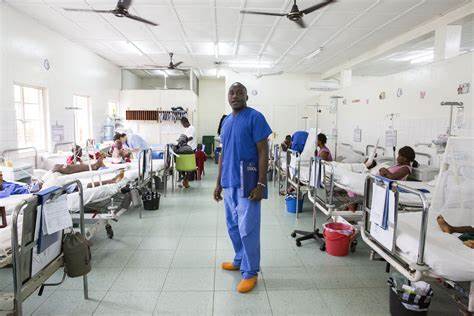 Sierra Leone’s second confirmed Covid-19 case was a hospital doctor who recognized early symptoms and immediately went for testing. With her positive result, the doctor’s contacts were asked to quarantine, including two university staffers who later tested positive. A hospital nurse in contact with the doctor also tested positive.

To its credit, the Sierra Leone government was ready after its Ebola experience to trace and quarantine contacts of identified or suspect Covid-19 cases in cities and district headquarters. Some 1,550 people have been quarantined to date, with 1034 discharged.

Emergency operation centers are in place for district surveillance and response. A lab technician in Kenema in the east, said to have recently worked in another Freetown hospital, just tested positive. Government teams are reported to have created a “ring” around his contacts to isolate and monitor them for a 14-day period.

But the April 17 report shows nearly a doubling of cases from 15 to 26. Most new cases are reported linked to the second case; they worked at the same hospital. But the doctor’s husband rightfully said it’s time to concentrate on community transmission. She appears to have been infected by community transfer. Her family, housekeepers and close hospital work associates have tested negative, while hospital nurses with little to no contact with her tested positive this week. They could have been community-exposed as the doctor was. As was the lab technician.

Those of us living the epidemic know what comes next. We can assume there are many more asymptomatic and untested cases now in the community, starting in Freetown and beginning to move around the country. There’s no defined plan to respond in rural areas.

Sierra Leone has more test kits than most US states started with. But logistically, it will be hard to test where and when needed. A lot harder for 60% of the population, in remote rural areas with little to no health care.

Community control The Sierra Leone government instated an initial three-day country-wide lockdown April 4-6. But too many people both in cities and villages must go out daily for food and to collect water.

The government’s control program now limits travel to within each of its 16 districts, set a 9 pm to 6 am curfew, limits public-sector business hours (the largest employer) and stresses staying at home wherever possible. Hand washing and social distancing are emphasized. They continue contact tracing and quarantines, but that will soon outstrip capacity to handle new cases.

This all sounds like reasonable guidance for urban areas and for literate people bombarded with Covid-19 information daily from TV, radio and internet. Now imagine the remote villages of Bumpeh Chiefdom with no communication other than a few people with only simple mobile phones for calls and bad connections.

Imagine people who line up daily to carry every bucket of water from a distance to wash. Imagine people who have no cash to stock their houses with food and supplies to stay at home for a week or more. People go to crowded local markets to sell goods to make enough money to buy the food needed for the next day or two.

These are people who need to take precautions to socially distance. To date, they’ve had no confirmed Covid-19 cases in their area. They’re disbelieving, never seeing or hearing of the illness. It’s all unreal to them. It was to us. Ebola attacked Bumpeh Chiefdom quickly, and it was deadly and ugly. Covid-19 has been a limited far-away city disease and only for the last 20 days.

In the back door With land borders to Guinea closed, people are finding ways to enter Sierra Leone through a back door – Bumpeh Chiefdom. Fishing boats coming from Guinea bypass the Freetown peninsula, stopping at the mouth of the Bumpeh River, the first settlements along a swampy coastline where passengers can find a way to move inland.

Three weeks ago, a boat coming from Guinea stopped at Samu village to let out passengers. One didn’t make it off. A man died on the boat of unknown causes. A local chief quickly came to keep passengers from leaving. With Paramount Chief Caulker’s direction, they were ordered to quarantine. A few slipped away and likely hopped a motorcycle taxi. It took two days before police and the community health officer arrived at the remote village to investigate. By then, the body was buried after being carried to the next chiefdom (by motorcycle taxi). Chiefs there were alerted to quarantine those involved in the burial. After three weeks, none of those quarantined are showing any symptoms.

Bumpeh Chiefdom Covid-19 program By then, Paramount Chief Caulker had already started the chiefdom Covid-19 control program, as described in our last newsletter. With their Ebola experience still fresh, Chief quickly instated checkpoints at strategic chiefdom entry points with mandatory handwashing, and is now expanding those. This is the most effective means of monitoring for outsiders bringing in the virus.

Social distancing is initially hard to get used to. The weekly women’s small grant meeting, above, spread out, but not quite six feet. Chief not only stopped gatherings, but leads by example, applying the six-foot rule in his own interactions. Our partner CCET-SL leaders do the same. Hand-washing stations are set up in public places, and people urged to wash hands at home.

They’ve adjusted past Ebola practices for this virus that’s less lethal, but more contagious. Chief and CCET-SL leaders, above, are introducing use of face masks when in public, starting with themselves. A project to make cloth face masks hopefully will start soon. Market women, who are “essential workers” in providing a supply of food, are priorities for masks.

The Samu village experience – and Ebola — showed small remote villages need close monitoring. This can only be done by the chiefdom’s own grassroots authorities. As during Ebola, Chief Caulker is organizing village chiefs to monitor their own villages, regularly checking door-to-door for strangers and for residents who may be sick. They can isolate the sick and ask for help to send people for health care, as needed.

Once again, it will come down to the paramount chief orchestrating his own chiefdom authorities down to small villages to control this epidemic. This chief has immediately gone into action.

Developing countries with limited health care and Covid-19 testing have to rely on local human surveillance. Until simple and cheap Covid-19 test kits are available in quantity for rural areas without electricity, this will be the primary way to contain the virus.

Sherbro Foundation is watching how the epidemic unfolds in Sierra Leone and is prepared to help again as needed.

Today’s good news: Six of the first confirmed Covid-19 cases, including the index case who was hospitalized and the doctor, have been released.