Zainab is now a Bumpeh Chiefdom truck driver. You won’t see another woman driving a truck in the chiefdom, and I doubt anywhere in Moyamba district or most of Sierra Leone’s rural districts. 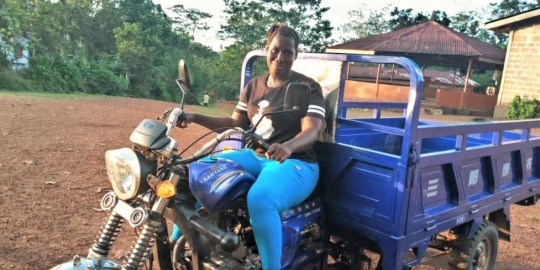 It’s a mini truck, but a vital part of our partner CCET-SL’s Orchards for Education project, carrying loads and workers from project fields to town in Rotifunk. Importantly, it’s a full time wage-paying job – another rarity in the chiefdom for man or woman.

Orchards for Education will create income for chiefdom children’s education. Another objective is to create local employment, with women hired wherever possible. When a truck driver was needed, the project’s response was, who said this isn’t women’s work?

The mini-truck, locally called a keke, is an easy and economical way to carry small loads the short distance from the project fields back into town. Here it’s being loaded with newly harvested rice sheaves.

Zainab was one of the first woman seasonal workers hired at the new vegetable growing swamp project, or IVS. Vegetables or rice are being grown year-round for income to operate the orchards before fruit trees mature and bear fruit.

While at the IVS, Zainab did well, taking responsibility and showing initiative. She was the women workers leader, responsible for sharing work assignments with the other women. She was good at monitoring them to ensure that work was done effectively and efficiently. And, she voluntarily sold the IVS produce at the weekly market.

Paramount Chief Caulker is a strong women’s advocate. When the project bought the mini-truck, locally called a keke, he said hire a woman driver. Zainab was the clear choice for the vehicle, a motorcycle pulling a small flat-bed.

Loaded with rice and workers, Zainab carries all back from the fields to town.

Zainab had never driven any vehicle, motorcycle or otherwise. She started her training on a regular motorcycle a week before the keke’s arrival. She quickly moved on to the keke. Last week the keys were handed over to her and she is now the project’s first full-time female worker.

Who said women can’t drive a truck? Zainab showed they can. After the rice harvest, she’ll be carrying a water tank on the keke around the orchard keeping young fruit tree seedlings watered throughout the coming dry season.

One thought on “Who Said This Isn’t Women’s Work”