Bumpeh Chiefdom leader Paramount Chief Charles Caulker long dreamed of developing his chiefdom using its own agriculture traditions. He wanted to grow fruit trees in his verdant tropical chiefdom that would produce income for community development for years to come.

“If we could raise fruit trees on a big enough scale, we could grow our own community’s future.”

“We could move to eliminate poverty in the chiefdom ourselves and make people self-reliant,” he said.

But in Sierra Leone, too often it’s one step forward and two steps back. Barely had recovery from Sierra Leone’s brutal 11-year rebel war begun, when the Ebola epidemic hit in 2014. A three-year economic crisis followed with 40 percent devaluation of its currency. Just surviving was a struggle.

Now, a two-year $142,000 Rotary International Global Grant is changing that.

Nonprofit Social enterprise  The grant creates a chiefdom social enterprise, one where agriculture projects generate regular income for nonprofit purposes. Thanks to Rotary Clubs, CCET’s Orchards for Education project is expanding to plant thousands of fruit trees to fund chiefdom education. An orchard will also be planted to feed a benevolent fund paying local hospital care costs residents cannot afford. And, women farmers are being funded to grow peanuts to fully feed and educate their children. 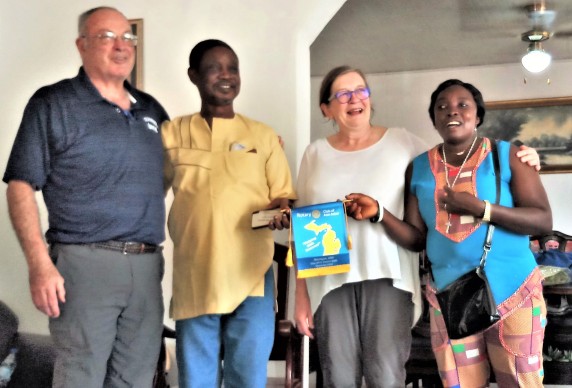 Grant impact A total of 60 acres of orchards with 4000 fruit trees will be developed through the two Rotary grants, as well as a tree nursery, a watering system and storehouse. In three to five years, the orchards will provide long-term fruit income for education and hospital medical care for Bumpeh Chiefdom’s 40,000 mostly illiterate residents.

Some 260 subsistence-level women farmers can double their incomes by growing peanuts with supplies they receive from the project. How can something as seemingly small as $50 for a bale of peanut seed and a drying tarp impact the women? The spokeswoman for recent participants said it best, “Indeed, our lives have been transformed.”

Their peanut harvests act as reserves, to sell as they need cash to feed their children. When annual school expenses or unplanned health care costs come up, the women can fall back on their peanut harvest to pay for them. They no longer need to take out high interest moneylender loans.

Bigger ripple effect The Rotary funded projects are having a bigger ripple effect in this rural community. The projects create 20 full-time jobs in a subsistence farming area with virtually no wage paying jobs. One hundred part-time and seasonal workers are also hired. Families’ lives improve with a regular wage-earner.

Full-time orchard workers display their protective gear purchased from the Rotary grant: rain suits for working in the rainy season and thick rubber boots for protection against injury and snakes.

In addition to being paid, Chief Caulker explained the bigger effect these jobs have on his chiefdom. The workers are learning improved growing techniques and skills under the direction of CCET’s agriculture manager, he said. They’ll take this home and apply it to their own farms and gardens. They’ll teach neighbors how to get better yields, too.

Chief Caulker said he himself is working to act as a role model to teach people by example. He’s growing his own fruit trees in different parts of the chiefdom and annual crops like cassava. When people see they can earn more money with fast growing fruit trees like guava plus cassava and vegetables than in traditional rice growing, they start diversifying and growing more crops themselves.

Empowering women From the project’s initial work, Chief said he feels best about empowering women subsistence farmers. By supplying women to grow peanuts as a cash crop and hiring others to grow vegetables and peanuts for the project, we “have brought hope to ending the growing economic and gender inequalities in our country,” Chief said.

“Women, who before now were relegated to the kitchen, can confess of becoming breadwinners in their families, sometimes above their husbands.”

Local women are hired as part-time workers where heavy labor is not needed. These are planting peanuts in an orchard to generate annual operating income. They’re paid wages equal to those of part-time male workers.

With Rotary Clubs’ generous support, growing its own community’s future is becoming reality in Bumpeh Chiefdom.

It’s a future they can direct themselves and multiply like seed from a harvest.

This project definitely took a village to launch – an American village. So many contributed to raising funds for a $142,000 grant. We send huge THANKS to all.