Adult Literacy is the simplest of programs Sherbro Foundation has supported. And one of the most gratifying. Seeing women I recognize, below, resuming classes in October in the new Computer Center made me smile, amid some happiness tears. They were back to eagerly learning after a long hiatus caused by the Ebola crisis and its aftermath.

The Adult Literacy program was a fast start and one of our first. Only committed students, dedicated volunteer teachers, a classroom and a blackboard required. No cajoling needed.

Women in the community came to Mrs. Rosaline Kaimbay, Prosperity Girls High School principal, not long after she arrived to start the new high school. They leaned on her, pressing for their own chance to learn to read and write.

In 2013, I saw Mrs. Kaimbay after her school day, leading lessons for the women with a blackboard on her small house’s porch. As PGHS grew and she hired more teachers, they were willing pitch in and teach after-school classes. Sherbro Foundation provided supplies, and adult classes moved to a primary school at 4:30 p.m., after the day’s work. Class was over by 6 when it was too dark to see with only open brick grids as windows.

One thing hasn’t changed — volunteer teachers, including some new instructors. Some retired primary school teachers in the community want to help the new learners.

Mr. Stalin Caulker, right, tutored schoolchildren struggling to learn to read for many years as a second career in Freetown. Here, he’s teaching addition to a Rotifunk group. Like many retirees, he finds it satisfying to help.

I remember the women I met in 2013 and why they wanted to start learning now.  Kadiatu, left,  was chief instigator and lobbied for classes for two years. She was her family’s breadwinner and head of Rotifunk’s women trader’s union, otherwise known as market women.

These petty traders sell by the tray and bushel in markets everywhere. She was tired of representing the group at district meetings and workshops and could only use her thumbprint to sign a document.

I talked with over 30 women one on one, and their stories were much the same.  Most were single heads of household, struggling to earn a living as market traders while raising their children. Some were also raising children sent by relatives in small villages to go to school in a bigger town, or children whose parents had passed away.

Some women wanted to learn to read and write their names for the first time, and to count so they wouldn’t be cheated in the market. They knew they could better run their small businesses with practical skills like figuring best prices and sales profits. Others had finished primary school, and after a long break, wanted to resume learning GED style.

All wanted to monitor their children’s progress in school and help with homework, learn more about children’s and their own health, and better run their households.

I wondered why they were so committed to study at the age of 30 and 45. I learned they were getting something priceless: Self esteem. No one is lower in society’s informal caste system than an illiterate woman.  She is belittled, taken advantage of, often abused.

With education, they’re holding their heads higher and not letting others take advantage.

Some of the best news — some women are progressing to other job training programs. 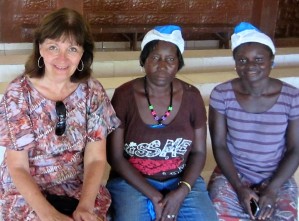 Magdelaine, with me on my far left, took a co-op style nurse’s aide training program in the district capital. Back home in Rotifunk, she works at the hospital.