From Ebola hotspot to zero new cases. This isn’t a dream.  It’s reality today in a number of  parts of Sierra Leone.

The media was blasting news through December about a country out of control with rising Ebola numbers.  Yes, the capital Freetown and northern cities like Port Loko have had high levels of new cases making Sierra Leone now the hardest hit country in the Ebola epidemic. They also put the whole country at continued risk because people continue to travel between districts.

So, am I an optimist talking about zero? I drafted this story a week ago and hesitated to post it for concern people would think this is just wishful thinking.  It isn’t.  In the last month, numbers have been steadily coming down. The Sierra Leone Ministry of Health’s daily postings of new Ebola cases have gone from 72 cases per day December 1, to 55 cases per day December 24, to 29 cases January 2.  January 12  was 19 new cases – for the entire country.

Eight of 12 districts in the country have achieved zero new Ebola cases for varying lengths of time.

So, what’s going on? I’m in weekly phone contact with Bumpeh Chiefdom in Moyamba District. I hear what Paramount Chief Caulker and paramount chiefs around the country have been doing in the last month. “Christmas was canceled.” Instead chiefs and other local leaders visited all parts of their chiefdoms with the task of influencing those resident behaviors that have been so resistant to change. In Sierra Leone’s culture, it’s the chiefs who have the authority to give people the difficult expectations on Ebola, like no traditional burials with washing of dead bodies  And chiefs can hold their people accountable.  More on this in another post. 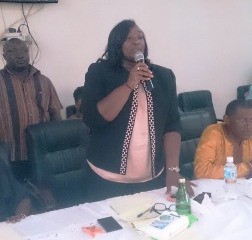 Today, many parts of Sierra Leone have learned how to control Ebola, and they have achieved zero new cases.  Quarantines are lifted after 21 days. To be declared “Ebola free,”  the magic number is zero new cases for 42 days.

Pujehun District was just declared the first Sierra Leone district Ebola free, now more than 42 days.  Pujehun is in the southeast corner, away from current outbreak areas.  They’ve only had 31 cases total to date. But they note they share a border with Liberia, and only their strict procedures have kept Ebola out of the district.

Kailahun and Kenema districts are the two original Ebola hotspots in the East where the disease first crossed over from Guinea. They both declared themselves with no new Ebola cases for 21 days or more. A few cases returned, but with fast reporting and treatment facilities available, they’ve been able to stop further spread. Five other districts are at or near zero for a number of days.

This Reuters story describes where Kailahun district is today and how they did it.  The last 21-day quarantine on a home was lifted on December 30. 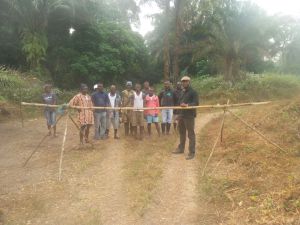 Bumpeh Chiefdom, where Sherbro Foundation does its work in Moyamba District, lifted a 21 day quarantine last week, leaving them today with no Ebola cases.  They had gone more than 42 days Ebola free.  Then a family in the remote SW corner of the chiefdom crossed back and forth between Bumpeh and neighboring Ribbi chiefdom, carrying Ebola with them. It resulted in two deaths in early December in Bumpeh Chiefdom, and more in Ribbi Chiefdom.

The village homes involved were quarantined. New chiefdom led check points were set up to stop movement between the chiefdoms with 24/7 monitoring .  Bumpeh Chiefdom’s Paramount Chief Caulker had no choice but to arrest and fine the Section chief and village chief involved for not reporting these Ebola cases.

This was the first instance in the country of chiefs being arrested for not carrying out their duties under the new Ebola by-laws.  They’re subject to six months imprisonment. It’s this kind of strict accountability that will stamp out Ebola.

It’s now been about 21 days and surprisingly, no new Ebola cases came out of the Bumpeh Chiefdom village quarantine.  Chief Caulker speculated that perhaps all the earlier sensitization training paid off. Perhaps villagers involved in the burial understood they could become infected and improvised ways to protect themselves.

2 thoughts on “From Ebola Hotspot to Zero”