“Just because you can’t do everything doesn’t mean you can’t do something.” Olga Murray, founder of the Nepal Youth Foundation.  Nine year-old Caitlin found something she could do to help fight Ebola in Sierra Leone. 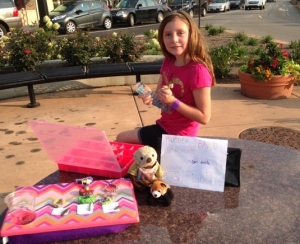 Caitlin came to me Friday with $18 she earned by making bracelets and selling them in a neighborhood business area.  She kept going until she collected $18 – the cost of one portable hand washing station being used to prevent Ebola transfer in Sierra Leone.

She set up her box of colorful rubber bands in a prominent place in the shopping district and proceeded to braid them into stretchy bracelets for sale. She was selling them for twenty five and fifty cents. When people saw her hand made sign saying she’s selling to help prevent Ebola, some people gave her a dollar.

When I asked her why she decided to do this, she said she wanted to give kids in Sierra Leone a good place to wash their hands and not get Ebola.  I was touched beyond words.

I stole the above quote from friend Karen. It says so well what we’re doing with Sherbro Foundation. We can’t save the world, but we can do something to help one Sierra Leone community get through the Ebola crisis.

Frequent hand washing is one proven way to stop spread of the Ebola virus. The money we’re sending now goes for public hand washing stations in  Bumpeh Chiefdom in rural Sierra Leone where there is no running water.

Thanks to Caitlin for joining our effort to fight Ebola in Sierra Leone.  Thanks to many others who also joined in with their donations this month. These helped us place one hundred forty public hand washing stations in Bumpeh Chiefdom in the last two weeks.  They’re already being used.

Villagers are also getting an important personalized education on the importance of sanitation and hand washing in preventing disease.  The leader of our Bumpeh Chiefdom partner organization, Rosaline Kaimbay, told me, These hand washing stations are protecting against more than Ebola. It’s raining now. This is the cholera season, too.

The Ebola outbreak is unfortunately growing at the moment.  We will have to maintain these hand washing stations with chlorine bleach or disinfectant for months to come.  You can help.  Click here to donate.