Sierra Leone and the Ebola crisis are all over the news this week. Everything we read is about the two main outbreak areas in Kailahun and Kenema in the east of the country.  But what’s going on in the rest of the country, you may wonder .

Weeks with the strain of bad news, much uncertainty and no direct support is taking its toll on a small town like Rotifunk. Imagine a country with some of the friendliest people on earth that has stopped shaking hands with friends and colleagues, part of the normal daily ritual of greetings. Everyone is eying each other for signs of illness.

President Koroma declared a national emergency and Monday, August 4 was a national day of prayer and reflection. Everyone was asked to stay home. And they did.  It was eerie to see pictures of the normally jammed streets of Freetown empty without even a pedestrian in sight.

This was a chance to complete Ebola sensitization training for all citizens.  We’d call it awareness training. Health care workers could make door to door checks.

Paramount Chief Caulker in Rotifunk, Bumpeh Chiefdom last week gathered all his section chiefs and other chiefdom leaders to personally explain symptoms of Ebola and how to prevent transmission of the virus.

The Ebola training poster is rather graphic.  It needs to be for the many people who cannot read.

Rotifunk is in Moyamba District and they are a long way from the Ebola hot spots.  The District has only had one confirmed Ebola case, fortunately not in Rotifunk. 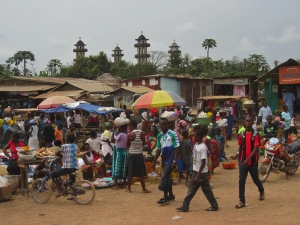 But with traders coming from many parts of the country for big weekly Luma markets, it wouldn’t be hard for a person just coming down with Ebola to show up in town. These Luma markets have now been banned. Local people are free to buy and sell every day as usual, but “strangers” cannot set up in town to trade.

P. C. Caulker was clearly tired and on edge when I called to check on things. I could hear the strain in his voice of now weeks of the crisis and trying to oversee protection of the people in his chiefdom. It wasn’t the first time he told me no Ebola prevention supplies had made their way to his chiefdom and the other smaller towns across the country.  He felt vulnerable – for the town and for himself.  I’m the chief and I have to receive everyone who comes to my door, he said.  I’m personally at risk.

We’ve trained people to frequently wash their hands, he said. Yet we have nowhere in public places like the market, mosques, churches and schools to do this.  In a town like Rotifunk with no running water and no public rest rooms, people can’t follow the procedures we just trained them on.

I asked what they need to improvise for hand washing. He described covered buckets fitted with spigots and diluted household bleach solution, now the country protocol. Done. The Sherbro Foundation Board quickly agreed to fund this, and I wired the money on Monday. By end of the week, they should have fifty of these hand sanitizing stations staged around town and a supply of bleach.

Chief’s second problem was harder to address.  Hospitals and clinics may have no personal protective equipment beyond thin disposable gloves and health care workers are afraid to handle people who become sick. Patients might be unattended for several days while waiting for Ebola test results to come back from Kenema. It’s understandable they are afraid. When they do their jobs, nurses and community health officers are at significant risk.

Buckets they can buy in Freetown, but not PPE.  To order and ship from here would be expensive and take a long time, even if we chose the right things.  Sherbro Foundation Director and physician Cheryl Farmer called the Infectious Disease unit at the Ann Arbor hospital where she lives. US hospitals are receiving bulletins on how to handle suspect cases of things like Ebola, including PPE. But the shipping dilemma remained. The whole process can take 6-8 weeks and be expensive.

I raised the concern on the Friends of Sierra Leone Yahoo group. This diverse group of former Peace Corps Volunteers and Sierra Leoneans now in the US has an active dialog group.  Within hours, I got a response from Raphael, working with the Well Body Alliance. This US NGO has sent a large shipment of PPE that should arrive soon and is intended for health care workers upcountry.  The Rotifunk hospital is now in the queue to hopefully receive equipment soon. Thank you, Raphael and Well Body Alliance!

So many times in recent months when I’ve felt the frustration of how I will get something done for Sierra Leone, my prayers are answered.  I’ve learned to be clear and just ask – by email, by phone, by website, by personal contacts.  By blog post.

This is how things are getting done in and for Sierra Leone these days. Often piecemeal and ad hoc.  But thankfully, we’re getting the basics done and making progress.

When I called Chief Caulker to tell him that PPE should be on its way, they had just read CNN news about Liberian Doctor Brantly and his remarkable turnaround from Ebola’s deathbed.  This is the kind of good news people need to hear. Not that it will affect the many people now sick in Sierra Leone. But good news is good news.  That night ended on an upbeat note. For once.

If you would like to help Sherbro Foundation defray the cost of the hand sanitizing stations for Rotifunk (an unplanned expense), your support is most welcome.  You can donate here.