Uncle Stalin Caulker is a fast learner on using a computer.

Sherbro Foundation is named after the Sherbro people.  I realize most of you do not know who the Sherbro are. So, I asked  the oldest Sherbro man I know to tell us what it’s like to be Sherbro.

Seventy eight year old Stalin Caulker is the only remaining uncle of Paramount Chief Caulker of Bumpeh Chiefdom.The Sherbro are said to be the oldest tribe in Sierra Leone. They’re a coastal people who inhabit most of the lowland coastal areas of Sierra Leone.  The Caulker family goes back to the 1500’s.

You can google the Sherbro to get a more historical account.  I thought you’d rather hear directly from a Sherbro on what he thinks defines the Sherbro.  Uncle Stalin said they know about all things having to do with water, because they grow up around water.  They’re expert rice farmers.  And the Sherbro, he said,  started Poro, the men’s secret society, now prevalent across Sierra Leone.

Here’s what Uncle Stalin had to say in his own words. 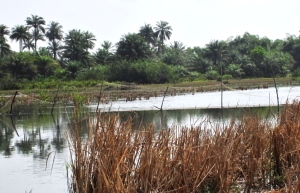 I thank Almighty God because I am a Sherbro and always by the sea.  We eat fresh fish.  I mean newly caught fish from the sea.  I can swim and all Sherbro know how to swim because you are forced to. Elders throw you in the water and ask you to swim to the land.

You are also taught to fish at an early age.  We have so many ways of fishing.  We make use of the strong tide from the ocean [that’s comes up the river].  We use the hook, cast or throw a net, or cross a net across the river when the water is dry [tide is out].  When the river is full you come and raise  the net so that all the fish that have gone up the river will remain in the net.

The Bumpeh river is unique in growing mangrove rice.  The paramount chief of Bumpeh chiefdom is my hero.  He plants eighty bushels and more of rice.  We start by brushing [cutting back] in February.  You give one month interval, and say in March you burn the {remaining} bush.

Then you broadcast the seed rice in a rice nursery.  You start ploughing the mud in April after broadcasting the seed rice. You turn the mud again before starting to transplant the seed rice after forty days interval.  Then you start harvesting at least 90 or 100 days {after planting}.

Poro was started in Sherbro land, then was adopted by others.  You belong to the clan and can participate in all activities after initiation.  You become a different person, a real man.  You are known by your {new} name like Kpana-Bom, Balaka and so on.  After that you learn all kinds of skills from other people like medicine for snake bites and belly ache, how to set traps and a lot of things.

The clan expects you to know how good men behave. When they call members to come together, everybody must come because you don’t know why they are calling.  Maybe they are going to teach new skills, so if you don’t go you have yourself to blame.

6 thoughts on “What is it like to be Sherbro?”