Sherbro Foundation is delighted to announce that founder and Executive Director Arlene Golembiewski was named Humanitarian of the Year by the worldwide P&G Alumni Network.

The biennial award goes to “the individual who has made a significant contribution to the human condition through their time, effort or expertise, whether this was a single event or a lifetime of work,” according to the organization. “This award is intended to recognize actions that go well beyond efforts in a single community or location and serve mankind as a whole.”

Arlene received the honor at the recent P&G Alumni Network Global Conference in Cincinnati, Ohio for former P&G employees.  Most attendees have gone on to new careers in many industries as CEOs, CFOs, marketing, advertising, finance, manufacturing and HR leaders.

In her acceptance speech, Arlene noted that in its first four years, Sherbro Foundation has funded 1,250 secondary school-fee scholarships for impoverished girls in Bumpeh Chiefdom, Sierra Leone. The Foundation is awarding its first college scholarship this year for a deserving village girl.

“For many, conditions in Sierra Leone can seem hopeless. But I found there were simple and practical things I could do that would have an immediate impact on improving the lives of the some of the world’s poorest and most inaccessible people,” Arlene said.

“These weren’t my ideas, and I couldn’t do any of this on my own living in the US. You need a strong community partner, and we have a remarkable one in the Center for Community Empowerment & Transformation. CCET-Sierra Leone is led by Board Chairman Paramount Chief Charles Caulker and supported by his chiefdom council. The work is all community led – so it’s moved quickly.”

“I share this award with my friends in CCET-Sierra Leone,” Arlene said. 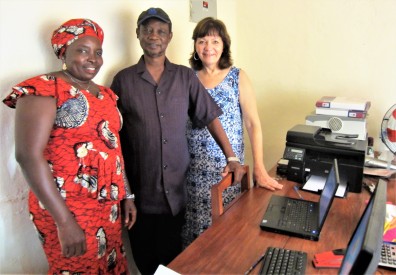 Arlene also thanked the P&G Alumni Foundation for their grant this year of $12,235 for CCET-Sierra Leone’s new education and computer center in Rotifunk. The money went to finish equipping the center, including 17 more laptop computers and a color printer for the first and only printing service in a district of 300,000 people.

The P&G Alumni Network has 37,000 members in chapters around the world, all former employees of the Cincinnati-based Procter & Gamble Co.  Arlene retired from P&G as Associate Director of Global Health, Safety and Environment after a thirty-year career developing HS&E programs around the world and assessing new product introductions for the world’s largest consumer product company.