Years ago as a Peace Corps Volunteer I had no idea the coastal rice growing culture of Sierra Leone I lived in had a special connection and significance for Americans.

Sierra Leone is the land of many African American ancestors who were forced into the “middle passage” and a life of slavery in the coastal rice plantations of colonial South Carolina and Georgia.  Not much was known of this connection back in the 70’s.

Little did I know when I first returned to Sierra Leone in 2011, I would actually visit the slave fort on Bunce Island.  This slave fort in Freetown’s harbor is the place from which thousands of Sierra Leonean captives were shipped to the New World over two hundred ago.

How do you describe what it’s like to visit a slave fort, especially one that’s been abandoned since the 1830’s and left virtually untouched?  Untouched except for two hundred years of tropical heat and humidity that have left it now in ruins.  The memories of thousands of lives still lurk in those ruins.

As we arrived by boat, the small island comes into focus and you recognize the Alcatraz type location.  By design, no one would escape from this place.  You initially feel the respect and awe of entering a sacred place, like a historic church or a temple of a religion you’re unfamiliar with.  You stop. You’re unsure how to proceed.

As our tour continued, hesitancy moves into curiosity and intrigue.  You want to understand the details of how people lived here, slaves and slave traders alike, and what actually transpired. That leads to feelings of repulsion.  How could that have happened.  When you stand at the Point of No Return gazing into the open sea leading to the New World, you’re left with your own thoughts to fathom what you’ve just seen.

Take a video tour of Bunce Island with CNN here. 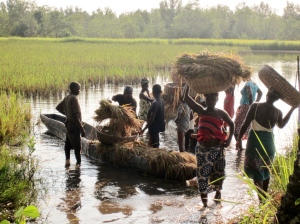 Unloading rice from field to the threshing floor 2013

Where the dots really connect for me is when I am now in the small rice growing villages of Bumpeh Chiefdom, places where much of daily life hasn’t changed that much in two hundred years. Like this picture and the one above I took in November, where rice that’s planted and harvested all by hand is being brought in with hand made dugout canoes to be threshed by hand.

I think to myself, this is an area where people could have been taken captive many years ago, or where captives from the interior could have traveled down the Bumpeh River to the coast and on to their fate on Bunce Island.

A lot more is now known of the process, if not all the details, of the slave trade.  Slave ship records have been analyzed and indicate a majority of enslaved Africans headed for the southern US shores came from the coastal countries of Sierra Leone, Liberia and Guinea via Bunce Island.  African captives leaving from other better known launch points at the slave forts in Ghana and Senegal were destined for the West Indies and Brazil, usually for sugar cane plantations.

Personal DNA testing is now available for anyone wishing to more deeply understand their heritage.  33% of African Americans who have had their DNA tested to trace their ancestral roots find they are genetically tied to Temne, Mende and other ethnic groups in Sierra Leone and Liberia.  Records from the Bunce Island trading companies and from slave ships indicate 80,000 slaves were shipped from there to the US between 1756 and 1807 when Britain outlawed the slave trade.  Extrapolating from these numbers, it’s believed more than 33% of African Americans are of Sierra Leonean descent.  Probably a lot more.

These Sierra Leone men, women and children were sought out for their skills in growing rice for the southern U S colonies.  It came full circle when Britain abolished the slave trade in 1807, and resettled slaves they freed as a new British colony on the peninsula of today’s Sierra Leone they named Freetown.  Although the US also stopped importing slaves in 1808, the slave trade within the US continued for more than fifty years more.

Professor Joe Opala, anthropologist and former professor at James Madison University, is the one who really connected the dots in Sierra Leone and US history. He made study of Bunce Island and the Gullah communities in coastal South Carolina his life’s work.  Joe came to Sierra Leone in 1974 as a Peace Corps Volunteer, as part of my same Peace Corps training group.  He got his PhD and taught at Freetown’s Fourah Bay College for 20 years.  His ground breaking research made the connection between Sierra Leoneans and the African American communities in lowland South Carolina and Georgia known as Gullahs, demonstrating their similar language, appearance and cultures.

Until fairly recently, these coastal lowlands were relatively isolated and undeveloped, keeping the Gullah community and their culture intact.  Groups of Sierra Leoneans and Gullah that visited each other in the 80’s could immediately understand their unique dialect as Krio, an English based language that’s today’s Sierra Leone lingua franca. They recognized each other’s cultural practices from song and dance, to food and sweetwater grass basket making.  DNA testing later confirmed Gullahs and Sierra Leoneans are kin.   http://www.yale.edu/glc/gullah/index.htm

Professor Opala with Ethnomusicologist, Cynthia Schmidt and Sierra Leonean linguist, Tazzia Koroma recognized Mende words in an old folksong recording sung by a woman in a Georgia Gullah community. They were able to trace it to a specific Mende village in Sierra Leone still singing the same song, a traditional song women sing when burying their dead.  This remarkable work is documented in the film “The Language You Cry In.”   YouTube Trailer     (Available from California Newsreel and Amazon.)

Sierra Leonean slaves eventually moved across the southern America, and their descendants went on to populate the US.  It’s estimated that 60% of African Americans may trace their ancestry to Sierra Leone.  These include Colin Powell and Whoopie Goldberg.

Sierra Leone is anxious to reach out to these “DNA Sierra Leoneans” and welcome them back to the home of their ancestors.

The Bunce Island Coalition, whose US branch is led by Joe Opala, is today working with the Sierra Leonean government to have Bunce Island and the remains of the slave fort there designated as a national historic site.

When I now travel down the Bumpeh River and visit traditional rice farms and villages, I remain mindful that there is a special link between Americans and the people of Sierra Leone.  Our people are kin.   Whether black or white, our histories and cultures are inextricably linked.

It’s Black History month in the US when we learn about and celebrate African American culture and heritage.  One of the important things I’ve learned since returning to Sierra Leone in recent years is their close link with US history and culture.

Most people don’t know that many (maybe a majority) of African captives leaving for the then American colonies in the 1700’s came from the Guinea Coast.  This is the area that now makes up the countries of Guinea, Sierra Leone and Liberia. They were brought to a slave fort in the Freetown harbor on Bunce Island and shipped to American plantations.

Sierra Leone is rice growing land. Sierra Leonean slaves were targeted to bring their skills in growing rice to South Carolina and Georgia plantations, among other areas.  Their descendants went on to make up much of the African American population.

African Americans can now learn about their ancestry with DNA testing.  Columbia University professor and HuffPost Live host Marc Lamont Hill learns of his African ancestry during his interview with African Ancestry, Inc. who performed his DNA testing.  See the video link below.

Part of Hill’s ancestry is with the Mende & Temne tribes in Sierra Leone. Watch the video to hear which other well-known African Americans can claim the same.  And what it means to finally know your ancestry.

Click for video:   African Ancestry Helps You Trace Your Roots

Global T was kind enough to Like the post “Growing a Baby’s Future in Sierra Leone.” So I went to visit their blog, The Traveling Winter Hat, and found it delightful. Too clever to try to describe here; visit it yourself.
Thought I’d re blog their Thought for the Day. Sherbro Foundation came about in part because I didn’t want to only read a page of the world’s book at this point in my life. I needed to get back to my Peace Corps past when first coming to Sierra Leone so long ago and life truly was an adventure.
Well, it still is.
Makes me also think of a recent Peace Corps recruiting ad: “Life is calling. How far will you go.” You don’t have to go as far as Sierra Leone. Just go, whether by foot or in your mind.
So Global T, I don’t see Sierra Leone on your Traveling Winter Hat map yet. You’re missing a lot.

“The World is a book, and those who do not travel read only a page.”
– Saint Augustine/Auguste of Hippo (Christian philosopher and theologian)

The above blog post about  bird watching in the coastal areas of West Africa caught my eye. I’d love to see Bumpeh Chiefdom in Sierra Leone develop as a birdwatching destination. It looks very much the same as the attached video of birdwatching in the Gambia.  (Click on “Reblogged” in the first line of the above text for the YouTube video)

I’ve seen a number of the birds shown in the video while traveling on the Bumpeh River and paddling canoes among the mangroves and swamp rice fields. Even in Rotifunk. Lots of beautiful, unspoiled habitat waiting for the discriminating birder.

This video is called Gambia birding near Kotu Creek.

Last January, there was the first bird count ever all along the eastern Atlantic shores, in thirty countries, from the Netherlands to South Africa.

From the reports by the counters (translated):

Simon Delany counted in Gambia: “Baobolong is a gem of a wetland north of the Gambia River. … We walked huge distances. The counter is at forty species, including black storks, six hundred African spoonbills, pratincoles and ten species of wintering waders.”

On 22 January, he counted the birds at a small freshwater pond in Nouakchot. “Immediately, a barn swallow. And black-tailed godwit, spoonbill, ruff and shoveler as well.”

In Sierra Leone, a Dutch black-tailed godwit was seen near Kagboro Creek. Meanwhile, contact has been established between bird counter Papanie Bai Sesay and Dutch researchers. The…