To bring business and tourists to Sierra Leone, they need to see the country and what’s going on today.  Brand Sierra Leone aims to do this.
Brand Sierra Leone is a global initiative started by a group made up of diaspora and media experts…, who want to promote a fresh perspective of Sierra Leone by spreading the most important and positive news in the areas of culture, economy and society from all around the country.
In order to do this, Brand Sierra Leone offers via http://brandsierraleone.tv/ a selection of short videos, documentaries, dedicated news and programmes especially focused toward tourism, arts & culture, history, music, fashion, inward investment, business, etc.
Brand Sierra Leone is made up of a team of professionals specialising in communication, marketing and creative applications for digital media such as pre/post-production video, graphic & editorial design, advertising optimisation strategies, etc.
Click through their website for interesting mix of videos about development, history and contemporary Sierra Leone culture. 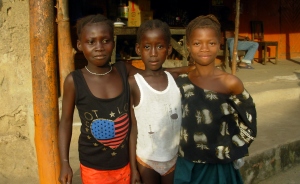 Donations are great, but there’s other ways to help, too.

The Sherbro Foundation was delighted to be invited to participate in an important event for women worldwide May 22 at Cincinnati’s National Underground Railroad Freedom Center.

The free public evening kicked off with a 5:30 p.m. reception and Action Fair. National and local nonprofits – including Sherbro Foundation — offered information about their efforts to uplift women and eliminate oppression and discrimination, both here and abroad, and how you can help.

The event is a follow-up to the recent traveling exhibit at the Freedom Center, “Women Hold Up Half the Sky,’’ based on the bestselling book, “Half the Sky – Turning Oppression into Opportunity for Women Worldwide.” Both serve as wake-up calls to the injustices perpetrated against women worldwide and the ways to effect change.

The program began with a 40-minute version of the PBS Half the Sky documentary.  A short keynote address was presented via live satellite by Half the Sky Executive Producer Mikaela Beardsley and followed by a brief panel discussion with local volunteers and activists.

The evening wrapped up with a longer Action Fair at to give attendees an opportunity to learn more about organizations supporting women locally and globally and how you can get involved and support them through volunteerism, advocacy or giving.

For more information on the Half the Sky movement, visit: www.halftheskymovement.org

Rotifunk, the seat of Bumpeh Chiefdom, was devastated in Sierra Leone’s 11-year civil war.  About 55 miles southeast of the capital, Freetown, Rotifunk was hit hard as rebel soldiers burned and looted their way to the capital.  Every building in the town of about 10,000 was burned except for a church and a mosque, and its people forced to flee. The town abandoned for several years.  The result:  total collapse of the socio-economic fabric, and a once bustling town found itself in abject poverty.

The war ended in 2001. Now a safe, peaceful, country, Sierra Leone is still, however, one where 70% of families struggle to survive in the aftermath of the civil war on $2 a day or less.   This is true for the rural community of Rotifunk and Bumpeh Chiefdom where agriculture is the main livelihood.

Back on its feet, Rotifunk has rebuilt itself to once again serve as the center of trade, education and health care for the area. Rotifunk is known for its lively Saturday market, where farmers and small traders from across the chiefdom come to sell their wares.  Fish from local  rivers are plentiful, as well as locally grown fruit and vegetables.   Rotifunk is preparing for its future by educating its children.  Four secondary schools are now operating, including all-girls and Islamic schools.

August 28, 2014 update: Latest up on Rotifunk’s first computer program.  We are turning a town tragedy into a triumph.  A community computer center is being built as I write this from the ashes of a rebel burned building. http://sherbrofoundation.org/2014/08/25/computing-center-roof-is-up/   This is all going on while the Ebola crisis rages.  Sherbro Foundation is helping Rotifunk and Bumpeh Chiefdom with a community-led Ebola prevention program that reaches down to the small village level.  You can help, too. Read on here.

As a U.S. based all-volunteer nonprofit, we partner with Sierra Leone community organizations to complete projects.  We support locally based groups in achieving their goals to strengthen and develop their communities.

Founder Arlene Golembiewski’s work in Rotifunk and Bumpeh chiefdom started with the Prosperity Girls High School, the first all-girls secondary school in the chiefdom.  PGHS was founded in 2009 and was expanding quickly.  Her aim to encourage girls in secondary education found fertile ground by partnering with PGHS on specific mutually agreed objectives like a scholarship fund for school fees in 2011.

With formation of Sherbro Foundation, this has expanded to a scholarship fund that is eligible to girls from all four secondary schools in Rotifunk.  The Center for Community Empowerment and Development now manages the scholarship fund and other community development projects in Bumpeh Chiefdom.  The PGHS teachers founded this “community based organization” and are volunteering their efforts in the Center to improve the community.  Other competencies they’re working on are adult literacy and computer literacy.

Sherbro Foundation works closely with organizations to first understand community needs, and then define clear and achievable project objectives we can work on together. By partnering with well regarded local organizations to deliver projects, Sherbro Foundation is able to avoid overhead and ensure every dollar we contribute goes directly to grass roots rural development.

We are committed to helping the people of Sierra Leone develop schools in rural communities after their 11-year civil war.  We focus on improving the quality of secondary education, especially girls school.  We are also promoting computer literacy and adult literacy.